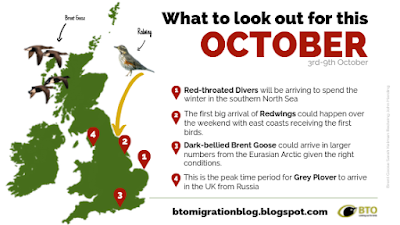 It has to be said, for many of our common and scarce migrants September was a disappointing month with many species such as Redstart, Spotted Flycatcher, Whinchat, Wryneck and Red-backed Shrike being reported well below their historical reporting rates. The main reason is likely to be the lack of easterly winds which causes continental migrants to ‘drift’ across the north sea to the UK. For much of September, Britain and Ireland’s weather was dominated by Atlantic low pressures and the associated westerly winds that blew across the country, a pattern that was experienced last autumn, begging the question is this due to climate change or is it just a short-term change in our weather patterns?


The persistent westerlies across much of Britain and Ireland last week did, however, produce American passerines in the form of not 1 but 5 Red-eyed Vireos! 3 in the Republic of Ireland, 1 in Northern Ireland on Rathlin Island which was a first for the country and 1 in Cornwall. 2 Yellow-billed Cuckoos were also found, 1 on the Isles of Scilly and the other was found dead in East Sussex, and a Buff-bellied Pipit was identified on Bardsey Island. The Northern Isles of Scotland we're blessed with south easterlies and this produced a Brown Shrike on Out Skerries, a Daurian Shrike (once called Isabelline Shrike), Siberian Stonechat, Red-flanked Bluetail, Bee-eater, and a few Red-breasted Flycatchers, Barred Warblers, Yellow-browed Warblers, and Olive-backed Pipits. The rest of the UK saw good numbers of House Martins, Swallows, Meadow Pipits and Chiffchaffs on the move, as well as good numbers of Great White Egrets occurring across the UK as they continue their colonisation, now is a good time to search your local waterbody for this elegant heron.

Ring Ouzels are a scarce breeding bird in Britain and Ireland with a preference for upland areas. The whole population is migratory with birds wintering around the Mediterranean basin. There are 2 main races in Europe, torquatus, which breeds in Britain and Ireland and Western Russia, and alpestris which breeds in montane areas from Northern Spain east to the Carpathians. The alpestris race has only been recorded a couple of times in the UK and is a short distance migrant, mainly moving to lower altitudes during the winter period. Ring Ouzels can migrate in large flocks with berries forming a substantial part of their diet at stopover sites. British breeding Ring Ouzels start migrating south in late September and continue into October, with a peak at the end of September probably representing the main departure period.

Other species that have a peak in their BirdTrack reporting rate in the coming week include Red-throated Diver, Pied Wagtail, Brent and Barnacle Goose, Grey Plover, Jack and Common Snipe and Kestrel. The northern European populations of Kestrel are migratory with birds from Scandinavia migrating as far south as West Africa. Some of these birds will pass through Britain as they head south with most observers assuming they are local birds when in fact they may have flown several hundred miles south already.

We are now into one of the most exciting periods of the autumn and, if the weather forecast is correct, we might get some much anticipated easterly airflow over the weekend. Winds coming out of southern Scandinavia and across the North Sea on Friday into Saturday should help any migrants waiting to make the journey. We ought to see the first big arrival of Redwings of the autumn so far on the east coast, with Blackbirds, Ring Ouzels and Song Thrushes also likely to be part of this arrival. We could well be in for a second wave of Yellow-browed Warblers with several birds still being reported in Southern Finland and Sweden that will be heading south over the next couple of weeks. You can track their movements via the EuroBirdPortal.
These easterly winds are really only coming from southern Scandinavia but if anything has made it that far it could get drifted across the North Sea with species such as Rough-legged Buzzard, Pallid Harrier, Rustic Bunting, Citrine Wagtail, and Red-flanked Bluetail all possible and maybe something altogether rarer like Black-throated Thrush?
Later in the period strong westerlies are forecast for southern Britain and Ireland, at times coming right across the Atlantic, this could provide the chance of one or two more North American land birds – Common Nighthawk anyone?