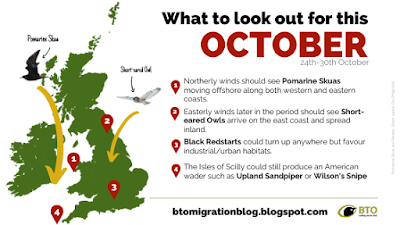 The past week has seen rare birds from all points of the compass arrive in the UK with Short-billed Dowitcher (Louth), Myrtle Warbler (Galway) and American Black Tern (Dorset) from the West, Hornemann's Arctic Redpoll (Fair Isle) from the North, Eastern Yellow Wagtail (Scilly Isles) , and Collared Flycatcher (Kent and East Sussex) from the East, and Lesser Kestrel (East Yorkshire), Pallid Swift (East Yorkshire) and Isabelline Wheatear (Lundy and Isles of Scilly) from the south.
The past week also saw a good arrival of Thrushes with large flocks of Redwing and Song Thrushes, Miles Hill in Hampshire recorded 9600 Redwing on the 21st October. Ring Ouzels were also reported from several locations and the reporting rate graph from BirdTrack shows the spike in reports carrying on from the good numbers arriving the previous week too.

Reports of finches such as Brambling, Siskin, Lesser Redpoll, and Hawfinch increased throughout the week and the numbers of these species will only increase over the next few weeks as more birds arrive from the continent. Numbers of Robin and Dunnock, both of which are often not thought of as migrants, also increased during last week as birds arrived from Europe for the winter.

Every winter large numbers of Starlings cross the North Sea to spend the winter months in the UK, adding to the spectacle of murmurations across the country. Seeing large flocks of Starlings wheeling around the sky it is easy to forget that all is not well, our breeding population has fallen by 73% since 1991. The highest numbers of ringed Starlings recovered in countries from overseas go to Denmark and Lithuania, a good indication of where many of our wintering Starlings originate. Starlings are also fairly long-lived birds, the record is held by a bird that was ringed near Ipswich, Suffolk on 20 November 1983 and found dead in Phillipova Gora, Demianski Rayon, Russian Federation on 15 July 2001, 2,122km from the original ringing location. Starlings are strong fliers and during light winds or winds with an element of east in them during the next few weeks, we should see flocks of them arriving on the east coast and heading off inland.

As has been the case for much of the late autumn this year the weather over the next week looks to be a mixed bag with the wind coming from several directions. This can be a good thing with the weather 'mixing' things up a bit and could result in a good variety of species arriving, departing and passing through the UK. The next couple of days sees an east-west split with western parts of the UK having westerly winds that are coming off a low situated between the UK and Iceland. This could bring in a few more Whooper Swans and Pink-footed Geese from Iceland. This short run of westerlies could also bring in a vagrant American wader such as Upland Sandpiper or Wilson's Snipe to somewhere like the Isles of Scilly or Ireland. Eastern and southern coasts will be dominated by a southerly airflow which may result in species such as Hoopoe, Red-rumped Swallow, and Pallid Swift reaching us. From the weekend the wind direction for the majority of the UK turns first more northerly then easterly by the middle of next week. Species that are likely to occur whilst the wind is of a northerly direction include Leach's Petrel, Pomarine Skua, which have their peak reporting rate in BirdTrack for the coming week, and Little Auks which can sometimes be seen in large numbers from North Sea locations, but they can also turn up inland as they have been known to join migrating flocks of Starlings arriving from Europe.

As the wind direction turns more easterly so the variety of species making landfall across Britain and Ireland increases. Wildfowl, such as Wigeon, Pintail and Shoveler, will arrive here from their breeding grounds in Scandinavia and northern Russia and large flocks can often be seen arriving over the North Sea. So far it has been a poor autumn for Great Grey Shrikes with very few reported but a few days of sustained easterlies could bring more birds across the North Sea. These same winds should also see more Short-eared Owls, Black Redstarts, Firecrests, and Woodcocks arriving from across Europe. Thinking a bit rarer easterlies at this time of year could produce Siberian and Stejnegers Stonechat, Hume's Warbler, Dusky Warbler or maybe a rare Asian Thrush such as Dusky or Eyebrowed.