Migration stepped up a gear this week on all fronts. Common migrants arrived in many parts of the UK and, in good numbers for the first time this spring. Reed and Sedge Warblers were recorded back on their breeding territories, Whitethroat numbers began to build up and a few more cuckoos were heard. Check out the BTO website for some exciting Cuckoo news.

Swifts traditionally arrive en-masse during the last few days of April and the first few days of May. With the number of reports growing through the week it looks like they could be true to form. Spotted Flycatcher is also has a late April arrival and as if to prove a point Portland Bill, Dorset, enjoyed their first birds this morning.

Black Terns have also been moving through the country in small numbers but it is the scarce and rare migrants that have stolen the show this week. At least four Subalpine Warblers, ten Woodchat Shrikes, ten Serins and eight Hoopoes were found, along with a couple of Short-toed Larks, five Red-rumped Swallows, two Citrine Wagtails and three singing Iberian Chiffchaffs. Star of the show has to be the female Rufous-tailed Rock Thrush that was found at Spurn, East Yorkshire on 25 April.

Our winter visitors also managed to get away as shown by the BirdTrack graphs below.

Alpine Accentor by John Harding
The weather forecast for this weekend promises to slow things down a little. However, very light winds across most of France and southern Britain on Sunday could hold some promise.  As southerly overshoots are the order of the day an Alpine Accentor would be nice.
Posted by Anonymous at 17:22 No comments:

Migration getting back to normal

For some at least. The last week has seen a wide range of summer visitors arrive bringing them to the levels we would expect at this time in the spring. House Martin, Sand Martin and Swallow have all pretty much caught up after a very slow start.

For our early warblers it is a very different picture though. Chiffchaff, Willow Warbler and Blackcap are all running about two weeks behind.

Mid-April to mid-May is the peak time for spring migration and it is already showing signs of hotting up. Pied Flycatchers and Redstarts are back in reasonable numbers. Our mid-spring arriving warblers are already showing their presence with Grasshopper Warbler, Whitethroat and Reed and Sedge Warbler being widely reported. The first flush of Yellow Wagtail are moving through, and the first Swifts of the year have also been seen, with one making it as far north as Fair Isle to become the earliest ever island and Shetland record.

Further north migration is still slow as two of my colleagues add - Jenny Gill and Graham Appleton are reporting that migration into Iceland is very slow this year.  They are particularly looking for colour-ringed Black-tailed Godwits, the arrival of which they record every year, but numbers of Redshank, Snipe and other birds that winter in the UK are also unusually low.  Has the weather prevented the godwits from taking off from passage sites in Britain, Ireland & the Netherlands, have they stopped in northern Britain prior to the sea crossing, or could they have died en route across the Atlantic.  If you encounter any of these colour-ringed godwits please send sightings to j.gill@uea.ac.uk.
While they wait for the godwits though, they are enjoying wonderful views of sea eagles and Gyrfalcon!

Strong gale-force winds have dominated the weather this week and have no doubt slowed down migration – birds don’t generally like flying too far in strong winds. However, the winds are beginning to drop and on Sunday there will be light northerlies extending all the way from Northern France to central Spain. Migrant birds like to fly into light northerlies and I have seen some of my largest spring arrivals on the south coast of Britain during light northerly winds. So, Sunday looks like a classic Alpine Swift/Red-rumped Swallow and Hoopoe day.

Posted by Anonymous at 16:31 No comments:

Migrants have continued to trickle in during the last week but it has been slow. Most of our early arriving summer visitors are running two to three weeks behind, as can be seen in the BirdTrack reporting rate graphs for Chiffchaff , Sand Martin, Willow Warbler and Swallow. However, with a change in the weather other species have arrived bang on cue.

Whitethroat, Sedge Warbler, Reed Warbler and Grasshopper Warbler all have an average arrival date around mid-April and all have been seen in the last few days. Large numbers of visible migrants have also been seen, largely comprising Meadow Pipit and Woodpigeon, 5000 of the former and 2000 of the latter were counted flying over Portland, Dorset on 9 April.

Despite the cold conditions and strong easterly winds, BirdTrack shows that the arrival of Ring Ouzel has been spot-on.  Conversely, it may come as no surprise that the classic winter thrushes, Redwing and Fieldfare, are late leaving.

The average arrival date for Whinchat is the 17 April. We aren't aware of any in the country yet but we expect the first arrivals next week. We still need more help to monitor this species in Wales. Could you help with the second year of the Welsh Chat Survey? 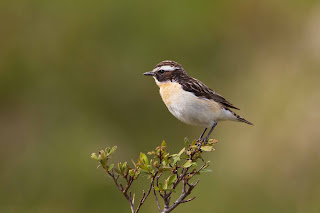 Two more Cuckoos were reported this week, in East Sussex and Kent, and our first satellite tagged Cuckoo won’t be far behind. Chris is currently in southern central France but he could make his move for the UK any day now- read his blog here.

We should finally see the back of the cold easterly airflow this weekend and the forecast is looking good for southern migrants. By Saturday we should be enjoying warm winds from the south which will bring migrants that have been held up with them. This weekend has the potential to be one of the most exciting of the spring. Summer migrants will be able to make their final dash to their breeding grounds, and winter visitors may finally get an easy passage across the North Sea. With the winds coming from so far south I wouldn’t be surprised if the two Hoopoes reported in the last couple of days aren’t joined by more Mediterranean birds. Woodchat Shrike is always a favourite at this time of the year.
Posted by Anonymous at 16:49 No comments: 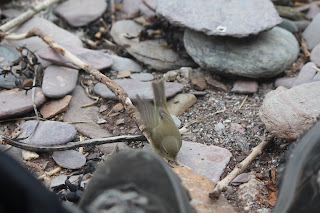 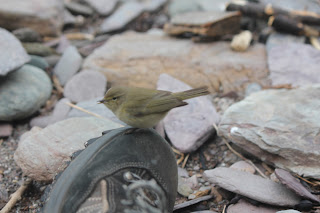