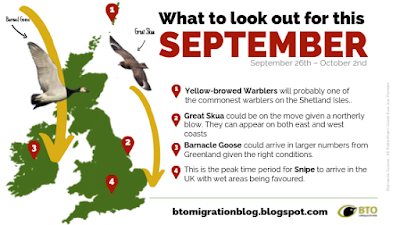 The warm sunny weather at the end of last week combined with a southerly airflow provided the conditions several species needed to head south, species like House Martin and Swallow were noted in mixed flocks at a few locations. Numbers of both these species will fall away very quickly now with very few individuals noted after mid-October.  In the last blog, we predicted that the southerly winds could bring Hoopoe, Alpine Swift, Red-rumped Swallow, Red-backed and Woodchat Shrikes to our shores, 4 out of 5 can’t be a bad return with Woodchat Shrike being the only species not to be found.  Rarity wise a Short-toed Treecreeper in Kent and a Blue Rock Thrush on the Isles of Scilly were the stand out birds.

Yellow-browed Warbler has become synonymous with autumn for many birdwatchers, much like the Swallow heralds the beginning of summer, autumn starts when the first of the Yellow-browed Warblers arrive. This small brightly marked warbler was once a rare bird in Britain and Ireland, with very few records before the 1960’s but since then there has been a huge increase in sightings with some locations hosting multiple individuals and places like Fair Isle have had days when over 80 birds have been noted. The distinctive high-pitched rising tse-weee call is often the first indication a bird is present and when seen, this bird, with its distinctive yellow stripe above the eye and double wing bar, is truly a gem of a bird.

Species that have their peak in reporting rates at this time of year include Snipe, Skylark and Reed Bunting all of which spread out across the country in readiness for the forthcoming winter months. A couple of closely related species replace each other at this time of year, as the last of the Whinchats depart so the numbers of Stonechats increases. A similar pattern can be seen with Willow Warblers as they are replaced by Chiffchaffs that migrate just that bit later than them.

The Northern Isles may well be the place to be during the early part of this period as southeasterly winds dominate for a few days. Yellow-browed Warblers are already turning up but something altogether rarer is on the cards, Pallas’s Grasshopper and Lanceolated Warbler are both possibilities and maybe something even more exciting like a White’s Thrush. Further south, most of the country will be in a westerly airflow for most of the week, with stormy conditions at times as low-front follows low-front across the country. At this time of the year in these conditions, a North American landbird isn’t out of the question – Red-eyed Vireo and Blackpoll Warbler are favourite but with a Chestnut-sided Warbler on the Azores, who knows?