The period from mid-September to mid-October is one of the most exciting times of the year for anyone interested in bird migration. Summer visitors that have spent the breeding season here begin to head off in earnest, whilst their counterparts in mainland Europe often get blown or drifted across the and add to the migration spectacular.
During the right weather conditions, rare birds from both the extremes of west and east can also form part of these movements. So far this season has lived up to expectations and provided something for everyone.

There have been record counts on the east coast of Siskins on the move. 2,129 were counted at Carnoustie, Angus, during the morning of 7 September. In Hampshire, 867 Grasshoppers Warblers have been trapped at one site and over forty thousand Swallows were counted over-flying Hengistbury Head, Dorset on 16 September.

Sabine's Gull by Joe Pender
The westerly gales have provided a seabird bonanza on the west coasts. 900 Sabine’s Gulls flew past Bridges of Ross, Clare on 17 September and birds also turned up on waterbodies in land-locked counties, with one Sabine’s Gull staying eleven days at Grafham Water in Cambridgeshire.
American waders are also widely distributed, with the largest arrival of Buff-breasted and Pectoral Sandpipers for many years. Seven species of North American landbirds have also been found in Britain and Ireland. Red-eyed vireo, Black-and-White-Warbler, Northern Waterthrush and Baltimore Oriole on the Isles of Scilly, and Buff-bellied Pipit, Swainson’s and Grey-cheeked Thrushes on the Northern Isles.
And it is far from over yet! This weekend saw a large movement of Black Terns through inland counties, involving several hundred birds. A single flock of 100 birds were seen at Standlake, Oxon. Meadow Pipits and alba wagtails (Pied and White), Swallows and House Martins were all counted in three figures at several sites along the east and south coasts and goose counts are beginning to increase.
Things should be a little quieter for visible migration watchers during thesettled weather over the next few days. Migrating birds fly over at a greater height, often not visible from the ground, during these conditions.
Posted by Anonymous at 17:11 No comments: 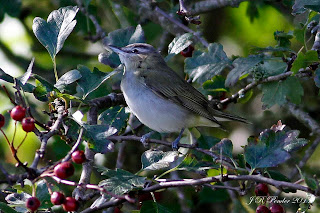 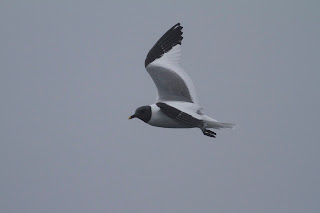 You can follow migration as it happens by checking out the BirdTrack maps and reports.
Posted by Rachel at 16:23 No comments:

The westerly gales that have been battering the coasts from the Cornwall to the Outer Hebrides have resulted in some spectacular seabird counts, in particular the rarer shearwaters. During the last week, over 7,000 Sooty Shearwaters, 2,500 Great Shearwaters and 600 Balearic Shearwaters, the latter globally listed as critically endangered, were counted off south-west Cornwall, south Devon and south-west Ireland. Among these were also numerous Grey Phalaropes, Leach’s Petrels and Sabine’s Gulls. Large numbers of Gannets and, as predicted in last week’s blog Manx Shearwaters were also seen in good numbers. Some newly fledged young of the latter struggled with the stormy conditions and 491 found themselves ‘wrecked’ on Newgale beach in Pembrokeshire. The BirdTrack reporting rate shows nicely the increase of observations of this species.

All four species of Skua were also involved in this movement, with Arctic being the most numerous, again the BirdTrack reporting rate shows this increase.

As was to be expected, the fast tracking Atlantic gales brought North American Waders with them and over a dozen Buff-Breasted Sandpipers arrived on our shores, with the Isles of Scilly hosting five of them, again the west received the lion’s share but birds have been found at Rye Harbour in East Sussex and Titchwell in Norfolk.

Despite the windy conditions Swallows and Meadow Pipits have been a feature of visible migration watches. Over 12,500 Swallows were counted heading south at Spurn Point last Saturday, with almost 8,000 Meadow Pipits heading in the same direction on Thursday.

With the wind set to increase again from the west yesterday, observers on the west coast should have been in for another weekend seabird fest, whilst in the east, finches and pipits should make the most of any lull in the windy conditions.

Question of the week - How do birds cope with the risks of migration?

For those migrants that undertake long sea or desert crossings, it is essential to store enough fat deposits to fuel these flights and many of our smaller birds spend up to three weeks feeding up and accumulating fat reserves before their departure, some will have more than doubled their normal weight.

Setting off in optimum conditions also helps to minimise the risk of being downed or blown off-course and also maximises the stored fat reserves. If birds encounter worsening conditions, many will make landfall and rest-up and feed-up until conditions improve.

Some birds migrate primarily at night, reducing the risk of predation by diurnal raptors. Flying in the cooler night air also reduces drag and minimises the use of the stored fat reserves.
Posted by Anonymous at 09:21 No comments: