The weather at the weekend was full of promise - light south to south-easterly winds, warm temperatures and along the south coast, a band of low cloud. The perfect recipe for grounded migrants and overhead visible migration.

So, were we up to our knees in birds that had arrived overnight and had been forced down by the cloud? Well, not exactly. Grounded migrants were encountered but only in small numbers, particularly on the south coast. The east coast fared a little better with Saturday being a Ring Ouzel day; small numbers were seen at several sites along with good numbers of Wheatears, and four Bee-eaters were seen on Sunday. 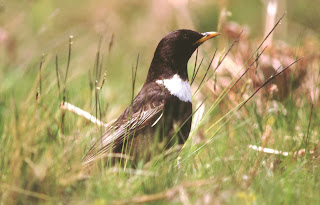 Above: Ring Ouzel by Tommy Holden
This doesn't mean that migration has come to a standstill, although it can look like it has at coastal watchpoints and observatories. Birds are still arriving but are overflying the coast at a height that makes them almost impossible to see and hear, and are arriving straight in to their breeding areas. This is giving us land-locked birders the opportunity to follow migration as it happens with the arrival of new birds.


The weather is set to remain fairly settled with the light winds coming from the east and south-east again this weekend, with perhaps a little more cloud on Sunday. So, the focus could again be on the east coast, and although the predicted east coast shrike didn't turn-up last weekend, it has to be on the cards for this one.
Posted by Paul Stancliffe at 09:58