Migration pretty much stalled on Monday, Tuesday and Wednesday. A strong north-westerly wind set in, making it extremely difficult for birds heading north to make any headway. In these conditions birds just sit it out, rest and refuel for the next leg of the journey. Birds did still trickle in, but migration was not a patch on what it was last week.

Some birds did however manage to arrive. The first Golden Oriole of the year was seen on Monday in Devon, and more Hoopoes were seen - this could prove to be one of the best springs ever for this species. New in, was an Iberian Chiffchaff in Norfolk, two Red-rumped Swallows in Kent and two Bee-eaters in East Yorkshire.

On Thursday the wind turned southerly and dropped in strength, this was the signal for birds to begin moving again . With this in mind I got out in search of grounded migrants at Dungeness, Kent. I didn't experience a classic rush of migrants but did find plenty of grounded birds where the day before there had been none. My tally included 20 Common Whitethroats, 15 Willow Warblers, 6 Wheatears, and single Lesser Whitethroat, Redstart and Ring Ouzel. 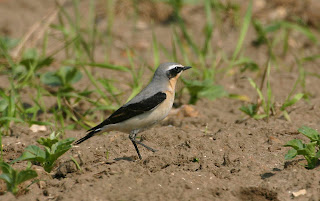 Above: Wheatear by Jill Pakenham
On the sea Common Scoters were actively migrating east through the Channel and in one hour I counted 217. Terns were also moving in the same direction with the same hour producing 120 Sandwich Terns and 65 Common Terns. All of these birds will be making their way into the North Sea, heading for breeding grounds around it's shores. The movement also included 3 Red-throated Divers, 4 Red-breasted Mergansers and 70 Gannets. 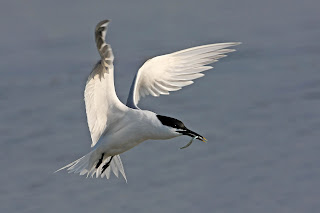 Above: Sandwich Tern by Jill Pakenham
With the wind remaining in the south this weekend, migration should pick up pace again and we could experience another rush with the arrival of lots of common migrants and a few more southern overshoots. The wind is promising to have more east in it than last weekend so the focus could very much be on the east coast. More Bluethroats could be on the cards and possible an early Red-backed Shrike or two and this could well be the weekend for the mass arrival of House Martins.
Posted by Paul Stancliffe at 10:16