For anyone following spring migration, this week has seemed more like the second week in May than the second week in April. There have been multiple arrivals of Hoopoes, Bee-eaters, Alpine Swifts, Purple Herons, Short-toed Larks and Woodchat Shrikes, along with singles of Western Subalpine and Sardinian Warblers, Whiskered and Gull-billed Terns and Red-rumped Swallows, to mention a few. 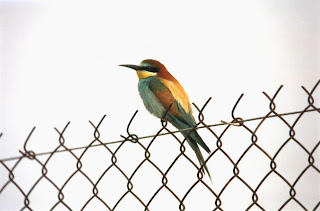 Above: Bee-eater by Su Gough
Common migrants have also been plentiful, Redstarts and Common Whitethroats turned up in force, a week or so earlier than expected. Swifts have been seen on Orkney and the Outer Hebrides and in Norfolk and Cuckoos have been seen at several sites at least ten days ahead of schedule.

All of these birds have been assisted to the UK by the warm southerly airflow that we are experiencing, and this is to continue over the weekend and into next week, with the wind turning to the magical south-east on Saturday. This could be the day to be out. These light winds make ideal conditions for migrants heading north from Africa but as can been seen from the list of Mediterranean birds above the southerly winds sometimes make it difficult for birds to put the brakes on.

So, what can we expect? This weekend has the potential to be the biggest weekend of the spring. There should be lots of common migrants arriving at coastal watchpoints. More Swallows, Redstarts and Cuckoos should make it to inland sites, along with the first real influx of House Martins and Sedge Warblers.  Who knows what else might turn up from the Mediterranean. Black Kite has to be on the cards but a Moussier's Redstart would be the icing on many a birdwatcher's cake. With high pressure extendng all the way from northern England to the deserts of the Sahara this might not be such a crazy suggestion!

Take a look at our interactive BTO Migration Timeline to keep track of all the arrivals. 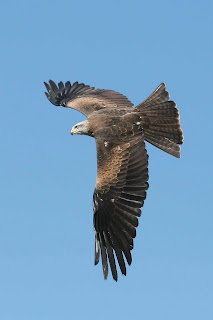 Above: Black Kite by Jill Pakenham
Posted by Paul Stancliffe at 16:15