Well. Was it the biggest weekend? It didn't provide the predicted Moussier’s Redstart, or the large arrival of House Martins. However, Moussier’s Redstart seems to be one of the few Mediterranean overshoots not to turn up. There was at least half a dozen Purple Herons, a similar number of Woodchat Shrikes, and almost a dozen Hoopoes. Two each of Subalpine Warbler, Whiskered Tern, Short-toed Lark and Red-rumped Swallow were found, along with singles of Little Crake and Great Reed Warbler. The predicted Black Kite may have arrived fashionably late with BirdGuides reporting one at 08.09 on Monday morning in .


But what of our common migrants? There might not have been a huge arrival of House Martins but good numbers of Pied Flycatcher, Tree Pipit, Ring Ouzel and Greenland Wheatear arrived, along with smaller numbers of Nightingale and Grasshopper Warbler. There was also several reports of Lesser Whitethroat and Garden Warbler. Lesser Whitethroats migrate from Africa around the eastern end of the Mediterranean to get to the , so the south-easterly winds on Friday and Saturday will have assisted these early birds. The weather conditions on the coast have been clear and sunny and as a result numbers of grounded migrants have been quite small. In these conditions birds overfly the coast and arrive straight on to their breeding territories. 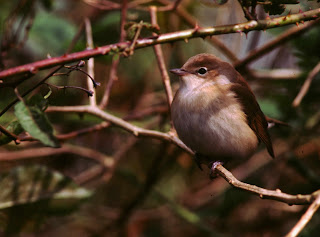 Garden Warbler by Tommy Holden
Posted by Paul Stancliffe at 09:21