There has been a lot of chatter both on social media and elsewhere that this has been a poor spring for some of our most loved summer migrants, particularly Swifts, Swallows and House Martins. Looking at the BirdTrack reporting rate graphs for these three species, all of them were reported at lower levels compared to their historical averages. Swallows arrived bang on time, whilst House Martins initially appeared to be arriving earlier but then dropped below the historical average and Swifts were around 1-2 weeks late. A cold northeasterly airflow could explain the drop in House Martin arrival in week 15 (WC 08/04/2019) which is also noticeable on the Swallow plot. The delay in arrival for Swift is also most likely due to an easterly airflow during week 16, which then turned to a southerly airflow during week 17 and in turn produced an upsurge in Swift sightings. 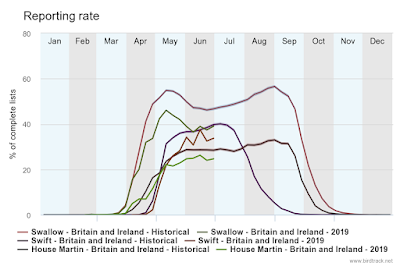 We will have to wait until the publication of 2019 BBS (Breeding Bird Survey) report in May 2020 before we can asses any population changes for these three species.

Back to the here and now, July migration is headlined by waders such as Spotted Redshank, and Green Sandpipers, which are amongst the first to head back. The females of both species are the first to depart as they leave the males to incubate the eggs and raise the young. The males and young of both species migrate later and start to appear in late July and early August. Green Sandpipers can turn up anywhere from saltwater lagoons on the coast to small vegetated ponds inland, their distinctive white rump in flight gives the impression of a large House Martin, and a high pitched three-note whistle is often given during flight. See the Green Sandpiper identification video https://tinyurl.com/y4wg3zrl for more.

Storm Petrels breed at a few locations in the UK, mainly on Scottish Islands and a few Islands off the coast of Wales, South West England and the west coast of Ireland. In July however, they are often recorded away from these traditional breeding areas and it is a long-held belief that these relate to ‘Wanderers’, non-breeding or failed breeders that are looking for potential new breeding areas. These movements can be rapid and over large distances, as illustrated by a bird ringed in Norway that was caught 613km away in North Yorkshire the very next day.

All of the BTO satellite tagged Cuckoos have now left the UK and have reached their first stopover sites in southern Europe. This year BTO scientists are following 11 satellite-tagged Cuckoos as they make their way to central Africa. Currently four of them are in France, six in Spain and one in Croatia, unfortunately, a twelfth bird was killed flying into a window at Dungeness. Having moved from Sherwood Forest, Nottinghamshire, this bird, named Robinson, was well on its way south. Migration is full of hazards. Follow the Cuckoos as they undertake their huge southward journeys at www.bto.org/cuckoos

During the last couple of weeks there has been a large arrival of Painted Lady butterflies into the UK off the back of warm south and southeasterly airflow, two birds almost certainly arrived on the same weather system, the Little Bustard in Gloucestershire and the Blue-cheeked Bee-eater in Highland - if the Painted Lady invasion continues as the weather begins to warm again next week, we might be in for a summer mega.

What to look out for during the rest of July.

At this time of year, south westerlies can produce Cory's Shearwaters and Balearic Shearwaters, with headlands in the south-west the best place to sea watch from. A pelagic trip from the Isles of Scilly could result in sightings of the once mythical Wilson's Petrel.

Together with the more expected Green, Common and Wood Sandpipers, other vagrant wader species can often be found in late July with Terek, White-rumped, Pectoral and Buff-breasted Sandpipers being the most likely.

Other species on the move in late July include Quail, Little Gull, Black Tern,  and Common Scoter, with the latter species often turning up on inland reservoirs so keep an eye out for these.

At the moment there is also a small influx of Two-barred and Common Crossbills happening, mainly on the Shetland Isles. The last influx was July 2017 and was confined to Shetland Isles with the exception of a single female on the Isle of May. In  2013 the influx was more widespread with birds scattered across the UK, will the same happen this year? A few Common Crossbills have been seen as far south as the Isles of Scilly, so it may be worth checking your nearest coniferous woodland. Larch cones are the favourite of Two-barred.

A Sooty Tern seen this year on the 24th June along the Yorkshire coast was subsequently seen again on the 9th July and is probably the bird from last year that was first seen on 7th July 2018 disappearing between  9th-19th July before relocating to Ythan Estuary where it stayed from 21st July -5th August. Perhaps it will head back there again this year?

Posted by Scott Mayson at 11:42 No comments: