The last few days of spring?

The last few days of May and diminishing returns from visible migration watchers usually marks the beginning of the end for spring migration. However, right now spring migration is still well under way.

House Martins are still being seen arriving in the low hundreds; 226 were counted passing overhead during a 90 minute sample count at Portland Bill, Dorset on 29 May;  these birds were also accompanied by good numbers of Swifts. The number of Spotted Flycatchers is more in keeping with mid-May than the end of May; looking at the BirdTrack reporting rate we can expect a few more yet.

Southern and eastern overshoots have been much in evidence this week. Red-backed Shrike led the way with over fifty being reported, followed by Common Rosefinch, which were reported from Devon to Shetland, involving as many as twenty individuals.  A supporting cast of four each of Woodchat Shrike and Short-toed Lark, three Hoopoe and several Wrynecks were upstaged by a European Roller in Hampshire, the first there since 1987.

Top-drawer rarity value was added by a White-throated Sparrow in a private garden in Lincolnshire and a Balearic Woodchat Shrike in Orkney.

With high-pressure set to dominate over the weekend and into at least the early part of next week, the resultant relatively light northerlies and warmer temperatures could mean more of the same bird-wise, perhaps with the addition of some bird of prey movement that could include Honey-buzzards and maybe a Black Kite or two.
Posted by Anonymous at 15:10 No comments:

The easterly airflow earlier in the week didn’t disappoint and there was a real flavour of the east. Around 100 Red-backed Shrikes were found, along with at least 15 Red-spotted Bluethroats and a handful of Ortolan Buntings. Other highlights included a Citirine Wagtail on the Outer Hebrides, a Paddyfield Warbler on Orkney and a Lesser Grey Shrike in Northumberland. Even with this supporting cast no-one could have foretold the finding of Britain’s first ever spring Dusky Thrush, found in the cemetery in Margate, Kent, an event which attracted over one thousand birders the day after its discovery.

As the winds turned to the north-west mid-week, so did the attention and an impressive movement of Long-tailed Skuas began, an amazing 1,125 passed Aird an Runair, Outer Hebrides in two-and-a-half hours on the 22nd.

On the common migrants front, Spotted Flycatcher, Swift and House Martin are still below the norm for this time of the year, as shown by the BirdTrack reporting rate. However, with warmer weather and lighter winds forecast for next week maybe we will see them catch-up.
With that in mind, next week could see the arrival of more overshooting migrants from the south and east, with Monday/Tuesday looking the best time for this. A showy Calandra Lark would fit the bill nicely.
Posted by Anonymous at 17:57 No comments: 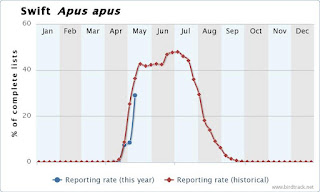 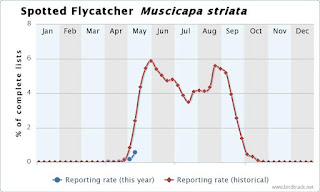 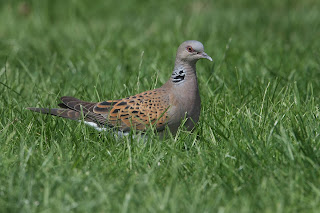 It has been a reasonable spring so far for rarer migrants, the early part might be remembered for the influx of White-spotted Bluethroats, Subalpine Warblers and Woodchat Shrikes, whilst the Rock Thrush at Spurn will undoubtedly be a highlight for many. It is far from over yet though and the last half of May and first half of June can often host top-drawer rarities. We should also see the arrival of more of those late common migrants like Spotted Flycatcher, Nightjar and hopefully Turtle Dove.
So what does the weather promise this weekend? The forecast is for the weather to remain unsettled for at least the next few days but the winds will, at least on Sunday, have an easterly element in them, originating from Scandinavia.  Birds trying to head north through Northern Europe might get pushed west into the UK so there is a possibility of Red-backed Shrikes, Wryneck and possibly the odd Marsh Warbler.
Posted by Rachel at 16:12 No comments:

With the onset of strong westerly winds, passerine migration has slowed a little. But these wind have pushed migrating Pomarine and Arctic Skuas closer to shore, with some birds moving through the English Channel, with the weather forecast to remain unsettled for the next three or four days, seawatching might be the order of the day.

After the initial flush of Hobbies the last week has seen many more arrive, and although they are still running a little late they are beginning to catch up. The same can’t be said for Spotted Flycatcher and we still await their main arrival.

Swifts have moved back onto breeding sites and can now be seen over many towns and cities, although they are present in smaller numbers than is usual. With strong westerly winds forecast for the next three or four days we might have to wait for their numbers to build up.

Common summer migrants have continued to pass through coastal watchpoints, with Whinchat being one of the most noticeable, along with further arrivals of Blackcap and Garden Warbler. With a spell of south-easterly wind mid-week rare and scarce birds were well represented, the pick of which for many will be the male Collared Flycatcher that was found in Northumberland. The same county also hosted a Black Stork!

Up to ten Hoopoes were seen from Scilly to the Outer Hebrides, a flock of eight Bee-eaters made a brief appearance in Norfolk and up to four Red-rumped Swallows were seen. Whilst from further east, Thrush Nightingale and Icterine Warbler were both seen on Fair Isle, and a male Red-breasted Flycatcher on nearby Mainland Shetland.

So, with strong westerlies the norm for the first part of next week things might be a little slower than last week but Skua migration could be very impressive. From mid-week the forecast is for more south-easterlies and maybe a repeat of last week’s birds and the possibility of a mega-rare. A full breeding plumaged Caspian Plover would see many birders heading to wherever it makes landfall.
Posted by Anonymous at 17:35 No comments:

The first few days of May can be a turning point in spring migration as numbers of those species that are already represented build towards the full complement, as if to prove this Blackcap, Whitethroat, Garden Warbler ,Willow Warbler and Nightingale have all arrived in force during the last week.

This is also the classic arrival time for Swift, and bang on cue, Swifts rapidly spread across the country over the weekend, along with the first few Turtle Doves.

Two of the BTOsatellite tagged Cuckoos are back on their breeding grounds on the shores of Loch Katrine, Stirlingshire, and House Martins have been recorded back at their nests too. If you have House Martins we would really like to hear about them via the BTO House Martin Survey.

It has also been a week of classic Mediterranean overshoots, with up to seven Purple Herons scattered around the country, a Bee-eater in Shropshire, at least six Hoopoes spread from Cornwall to Ayrshire, five Red-rumped Swallows and a flush of Golden Orioles adding to the flavour.The last few days have also seen a mini-influx of Red-footed Falcons, with as many as five birds arriving, at least four in the East Anglian Fens and one on St Martin’s, Isles of Scilly.

So, what can we look forward to this weekend? With very light winds forecast for much of southern Britain, as a result of high pressure that will extend all the way down to Spain, and by Monday, North Africa, we can look forward to more of the same, in southern Britain at least. It seems that the north is returning to wintry conditions which will put a temporary hold on things there, and as it’s May, we could just about expect anything to turn up. Collared Pratincole would
be my favourite.

Posted by Anonymous at 17:04 No comments: