Look to the east this week

This week has seen migration step-up a pace. Swallows have been pouring out of the country. On the south coast they were on the move in what was described as ‘biblical proportions’. 34,000 were counted moving through Christchurch Harbour alone on the 22nd, accompanied by 2-3,000 House Martins. Pink-footed Goose flocks increased throughout the week, the first Redwing flocks began to arrive and finches also started to move, mainly involving Goldfinch and Linnet, albeit in small numbers. Bramblings and Lapland Buntings also began arriving bang on cue.

On the rarity front it really was a case of east meets west, with top drawer birds arriving from both directions. Top billing has to go to the North American Eastern Kingbird on Inishbofin, Galway, shared with the Wilson’s Warbler on Dursey Island, Cork? Whilst from the east the White’s Thrush on Fair Isle, Shetland, and the two Brown Shrikes, in Hampshire and on Orkney were not too far behind.

Almost putting these in the shade, however, was the sheer number of Yellow-Browed Warblers that arrived. On Unst, Shetland, 80 were counted on 26 September alone, and birds made it as far south as Kent. With 40 on Fair Isle, Shetland and double figure counts from other sites too, there could be as many as a thousand in the country, surely one of, if not the, biggest arrival of these fantastic little birds ever.

So what of the weather over the next few days? High pressure is pretty much settled over the continent east of the UK, putting us in a fairly constant easterly airflow, at least for the next three or four days. So, this is where most of the action should come from. It is hard to believe that more Yellow-browed Warblers could arrive but a further arrival is definitely on the cards, and it is inevitable that they will bring something rarer with them. A showy mainland, east coast Lanceolated Warbler would be too much to ask of this supreme skulker but it is one to look out for.

Brent Geese should really begin to move this week, along with Wigeon and Red-Throated Diver, particularly for those seawatching from the east coast, and for visible migration watchers, Meadow Pipit could put on quite a show, whilst finch numbers should also build through the week.

With everything pointing to arrivals from the east it would be easy to forget the west, and, although the lows tracking across the Atlantic won’t be quite as deep as those of last week, they could still quite easily bring the odd North American bird with them. Black-billed Cuckoo is long-overdue and would be guaranteed a lot of attention if one did arrive.
Posted by Anonymous at 16:35 No comments:

Westerly airflow and Atlantic storms have dominated the weather this week, as have birds that would be expected during these conditions. Leach’s Petrels have been seen in good numbers off north-western coasts, American waders, such as Buff-breasted Sandpiper, American Golden Plover, Baird’s Sandpiper and Wilson’s Phalarope have all been found, along with the second North American landbird of the autumn so far, a Baltimore Oriole on Shetland. Shetland also hosted the first North American landbird this autumn, a Black-and-white Warbler. The north and west have had the lion’s share of the action, which is not that surprising as the Atlantic storms have arrived to the north of the UK. What is a little more surprising is the arrival of birds from the east.

Despite the almost continuous westerly airflow at least a dozen Yellow-browed Warblers arrived during the week and a couple of Arctic Warblers and a Little Bunting on the northern isles added to the eastern them. New Red-backed Shrikes and Wrynecks were also found but for rarity hunters, these were overshadowed by the Brown Shrike found in Hampshire on the 20th.

The strong westerlies disrupted migration a little but Meadow Pipits did move when conditions allowed, 5,700 were counted moving through Spurn on 17th. Bang on cue, 2,610 Pink-footed Geese also passed over the same site on the 18th, probably on their way to North Norfolk. Swallows and House Martins moved through in good numbers over the same couple of days.

The weather forecast for the weekend promises much of the same. A low will track across the Atlantic and will be stopped in its tracks just off the west coast of Ireland as it comes up against high pressure that extends from Eastern Europe all the way to Ireland. The perfect recipe for more east meets west birding, only this time the action could be much further south. I wouldn’t place any bets but American Redstart in the South west and a Bimaculated Lark in Norfolk would definitely fit the bill but Red-eyed Vireo and more Yellow-browed Warblers might be more likely.
Posted by Anonymous at 16:55 No comments: 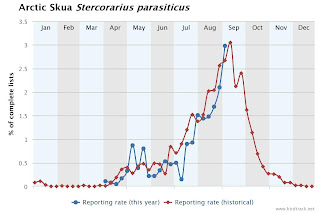 Moving up the rarity stakes, the first North American Catharus thrush of the autumn – maybe a Swainson's Thrush – could be on the cards, and how about a hirundine or swift from across the Pond? There's already been a Purple Martin in Holland and a Chimney Swift in Portugal in the last week, so here's hoping!
Posted by Nick at 14:43 No comments:

Autumn migration hits its peak - for some species

The peak period for autumn migration, as measured by large movements of a particular species at a bird observatory, or migration watchpoint, is often thought to run from mid September to mid October. However, for some species the peak has already passed, the last of the satellite tagged BTO Cuckoos left the UK on 26 July.  For others, it is right now, as is the case for Whinchat, and it will be a few weeks away until Meadow Pipits peak. So there is plenty to look forward to.

Of course, migration is influenced by the vagaries of the weather and birds can either be held up, or leave early, depending on the conditions.  BirdTrack is a good indicator as to what is happening as the autumn unfolds. The BirdTrack reporting rate for Whinchat illustrates this perfectly, and shows that unless things change Whinchat migration is bang on cue.

So, how might the weather influence migration this weekend?

Low pressure is centred over the UK from Friday afternoon into Saturday morning and as a consequence of this the weather is going to be unsettled for most of us. On the face of it it doesn’t look like there will be much movement from the east, however, depending on the timing of rain on the west coast of Norway, migrants here might be tempted to leave and be drifted across the North Sea in a short window of easterly airflow. So with poor weather on the east coast, particularly from Shetland down to Yorkshire, we might see a fall of migrants that should include Whinchats, and possibly a few Red-backed Shrikes. And, who knows? Maybe something altogether more exciting, I’m hoping for a Norfolk Pallas’s Grasshopper Warbler  but will be just as happy with a small fall of Spotted Flycatchers.


Saturday morning looks best for the east coast, whilst on Sunday, interest could turn to the west and perhaps an early North American land bird.
Posted by Anonymous at 16:56 No comments: