Most of the focus during the early part of the week was in the west, with Leach’s Petrels being the stars of the show, good numbers of which moved down the west coast in stormy conditions. Now that the wind in the has dropped the migratory focus has switched the east.
Goldfinches have dominated, with some impressive day counts at migration watchpoints. At this stage of the autumn it is the finch movement that will be most obvious, and this has been very much the case over the last couple of days. Linnets, Redpolls, Siskins, Crossbills, Bramblings and a small number of Hawfinches have all been in evidence, particularly on the east coast. Some of these finches will move into gardens in search of food as the wetter conditions cause the pine and alder cones to close, making the seeds difficult to access, others will continue on their journey south and could also provide a visible migration spectacular on the south coast. 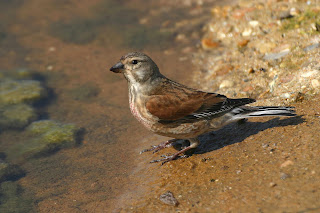 Linnet by Jill Pakenham
Flocks of Redwings and smaller numbers of Fieldfare have also begun arriving with these birds moving inland very quickly in search of food, so garden birdwatchers will also be able to see this migration in action. Goldcrests have also been a feature of the last day or so.
With the wind forecast to turn south and south-easterly for the weekend, we can expect a migration spectacle. The winter thrushes should arrive in large numbers and most of us should catch-up with our first birds of the autumn. The finches will be on the move and more Goldcrests, along with a few Woodcock should feature. 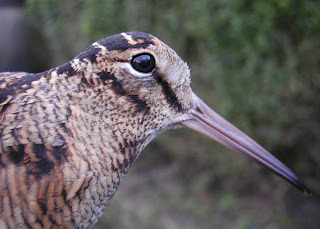 Woodcock by Herbert and Howells
The east coast will be the place to be, particularly on Saturday, and the vanguard of this movement has already begun. Double figures of Short-eared Owl have arrived on the Norfolk/Suffolk coast today, and flocks of Crossbills have been moving overhead.
Light rain on Sunday could result in the first falls of the autumn, with the east coast again being the place to be, but with thrushes on the move and finches turning up in gardens there is the promise of something for all in what could be the biggest movement of birds of the autumn so far.
Posted by Rachel at 10:37