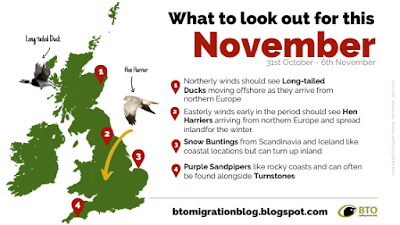 The past week saw much of the country under the influence of southerly and westerly winds which then swung around to a more northerly direction over the weekend onwards before finally bringing in a run of much anticipated easterly winds at the start of the week.  Whooper Swans took advantage of the northerly element and the BirdTrack reporting rate shows a spike in reports as birds arrived from Iceland. Peak counts included 369 at Teviot Haughs, Borders on the 26th and 133 from Hornsea Mere, Yorkshire,  the previous day. Whilst reports of Redwing started to level off, those for Fieldfare increased, this species typically arrives later than Redwing and the first big arrival happened over the weekend and into the start of this week. In Cumbria 7897 Fieldfare were recorded on the 29th and 5947 were seen at a location in Lancashire the next day. Big movements of Woodpigeon are a feature of settled weather at this time of year and with clear skies and light winds at the start of the week some locations recorded large numbers of birds on the move with a peak count of 64,000 in Cardiff on the 28th being the highest number reported via BirdTrack.

Mixed in with the commoner migrants were a few rarer species with top billing going to a 1st winter Steller's Eider on Orkney, this is the first since November 2000 and the last truly twitchable bird was in the 1980s! Other notable species included Tengmalm's Owl in the Scottish highlands, which will prove popular if it gets refound, the returning Pacific Diver in Ireland at Crookhaven, Swainson's Thrush on Mainland Shetland, Two-barred Warbler in Ireland (a first for Ireland), and the returning White-winged Scoter in Scotland. As for the species we predicted in the last post, an Upland Sandpiper was found in Cornwall, 6 Hoopoe's were reported and single of both Pallid Swift and Red-rumped Swallow were also reported.

Cool, clear conditions with light winds in late October/early November provide the ideal recipe for Woodpigeon migration. Little is known about Woodpigeon movement in the UK but as a species, it is found from western Siberia in the east to the Faeroes in the west, and as far north as Fennoscandia and south as North Africa.
Some continental Woodpigeons move south in large numbers, during the last week almost a million birds have moved south through Falsterbo, southern Sweden, and small flocks have been seen heading out to sea on our south coast.
It is thought that any movement of Woodpigeons seen here either involves birds that have been drifted across the North Sea and are carrying on south, or a movement from the north within the UK. It is also thought that many of the birds seen heading out to see don’t go very far before doubling back. However, there is evidence of birds continuing their journey south with flocks being recorded leaving Cornwall then being seen over the Isles of Scilly, the Channel Islands and the Brittany coast.
Many of the continental birds head to Spain and Portugal to feed on the acorn harvest, via a flight around the western end of the Pyrenees, some may take a route around the eastern end of the mountains but this is far from clear – there is still a lot to learn.


Weather for the week ahead

For the start of the review period, the easterly winds from the last couple of days remain and feed in air from Germany and the near continent but as we move towards the weekend an Atlantic low sweeps across the country changing the wind direction to south/south-westerly and also bringing rain to many parts. From Monday this low-pressure system deepens and tracts north east dragging in colder air from the very far north with day time temperatures across much of Britain and Ireland struggling to get into double figures.
The easterlies at the start of the review period could see an increase in Hen Harriers, Woodcock and Short-eared Owls as their peak reporting rates are at this time of year as birds arrive here from their breeding grounds further north and east. Keep an eye out in larger gardens, woodland parks and field edges for Woodcock that seek shelter when they first arrive. These winds could also drag in a rare Wheatear such as Pied or Desert and maybe a few more Pallas's Warblers or the first Hume's Warblers of the autumn.

The Atlantic low that will be with us from the weekend onwards opens up a slight airflow from America and could yield American Robin, which are typically late migrants, Franklin's Gull, or maybe even a Cliff Swallow or Chimney Swift? As this system moves across the country it produces a brief run of easterly wind for northeastern Scotland, the Northern Isles and parts of northern Britain and given that some parts of Scandinavia are experiencing an influx of Rose-breasted Grosbeak, a large finch of the Tiaga zone, many birdwatchers will be hoping for a repeat of 2012 with a bird arriving this side of the north sea, preferably somewhere easily accessible. You can read more about this influx here https://www.birdguides.com/articles/major-pine-grosbeak-invasion-gathers-pace/
The run of southerlies brought about as low pressure moves across the country could produce more Pallid Swifts and Hoopoes
Once this low-pressure system arrives in scandinavia at the start of next week the resulting northerly winds should see an arrival of white-winged gulls (Iceland and Glaucous), Long-tailed Ducks, Little Auks, Velvet Scoter, Snow Buntings, Purple Sandpiper, and numbers of Common Gulls and Black-headed Gulls will continue to build as birds arrive from further north and across Europe. Mixed in with these could be rarer species such as King Eider, White-billed Diver and maybe even an Ivory Gull or Brunnich's Guillemot who knows, one thing is for sure at this time of year, you never know what is going to turn up!