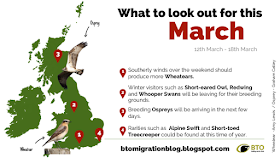 Dare we say it? It seems like spring has sprung, with the first of the summer migrants appearing on our shores. Sand Martin, Swallow, Wheatear, Willow Warbler and Little Ringed Plovers have all put in an appearance, with Sand Martins making it as far north as Lancashire. The intensity of summer migrants will be as ever weather dependent but with a warm spring and favourable conditions the volume and variety of birds arriving will increase over the next couple of months. The timings of arrival vary from species to species with some species like Osprey, Garganey and Stone-curlew arriving at the start of spring, whilst others like Spotted Flycatcher, Turtle Dove and Swift tend to arrive much later.

The last few weeks have seen little in the way of significant bird movements, warm weather across Europe has meant no significant cold weather movements of wildfowl occurred and, as a result, reports of species such as Smew and Goldeneye have been well below average.

The continued run of Atlantic weather systems no doubt contributed to the arrival of an adult Ross’s Gull in Devon and a 1st Winter Laughing Gull in Somerset, both of which normally spend the winter on the other side of the Atlantic. Other rarities have included the long-staying 1st winter drake Steller’s Eider on Orkney and the Tengmalm’s Owl on the Shetland Isles, which has been proven to be a different individual to the one there last year, the term 'like buses' comes to mind!

It is not all about arrivals at this time of year either, it may be best to think of the British Isles as a major airport with both arrival and departures from across Europe and beyond, and the next few weeks will see several species departing for the summer. Often a feature of the autumn, now is also a good time of year to listen for the high pitched 'seep' call of Redwings at night as they head back to Scandinavia. Other winter visitors such as Fieldfare, Bewick’s and Whooper Swans, Waxwings and Brent Geese will also start to depart in the next few days.

Chiffchaff
Wintering in the Mediterranean, North Africa and south of the Sahara in West Africa, Chiffchaff is one of the first of the summer migrants to arrive back in the UK, typically in early March. Although Chiffchaff is an overwintering regular, a sudden flush of singing birds in areas where they have been scarce or absent during the winter months is a sure sign that the first wave of migrant Chiffchaffs have arrived. This was definitely the case during the last week, with singing birds being widely reported in the southern half of the country.

In recent times the British breeding population has seen a bit of a surge, increasing by 140% during the last 25 years, at a time when the population of its close relative, the Willow Warbler has been falling, down by 42% over the same period. In 2013 it was estimated that there were 1,200,000 pairs in the UK, by 2020 that number is estimated to be 1,750,000.

The oldest Chiffchaff BTO has on record reached the ripe old age of 7 years, 7 months and 24 days, and was ringed as a juvenile at Winchester College, Hampshire, and found dead at El Kelaa Mgouna, Ouarzazate, Morocco, 2,237km from its birthplace. The longest distance recorded is for a individual that was ringed at Portmore Lough, Antrim and found in Guinea Bissau, 4,816km away.


Weather for the week ahead


The weather over the coming weekend looks to be set for a run of South/south-westerly winds and with it a rise in temperatures, this should produce another wave of early migrants to the south coasts with more Sand Martins, Swallows, and Wheatears expected, and possibly the first wave of Garganeys and Little Ringed Plovers for the year. Black Redstarts and Firecrests will also be on the move and the first singing Chiffchaffs of the year are likely to involve birds that haven’t come too far and wintered in the UK or near continent. As always coastal sites are likely to get the lion's share of these early migrants but inland waterbodies shouldn’t be overlooked as these are often used by Sand Martins, Swallows, Little Ringed Plovers and Osprey, particularly those that breed in Scotland that often arrive early and make a beeline to their nest sites. Possible rarities that could occur at this time of year include Alpine Swift, Short-toed Treecreeper and Franklin’s Gull; enough to keep anyone happy.
As mentioned earlier, its also worth looking out for departing migrants with species like Brambling, Fieldfare, and Waxwings all moving towards the coast they can turn up anywhere, from gardens to local parks.
The latter part of the week is forecast for a switch to a northerly wind direction which could curtail migration for a few days.